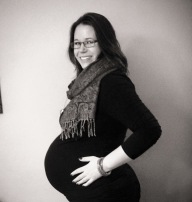 This pregnancy was tricky. Because Max was born early we approached everything differently and with caution, which is to say I maintained a irregularly high baseline of anxiety the past nine months. Once a woman gives birth prematurely their risk of doing it again goes way up. I had reoccurring infections, which create an inflammation risk and lead to premature birth. The result? Ten courses of assorted antibiotics and attempted home remedies. Exhausting and stressful. Additionally, after reviewing research with our doctor, Jessica Sandmeier at Integrated Women’s Health, we decided to do weekly progesterone injections from the second trimester to the end of the pregnancy. It’s clear the injections and antibiotics are what allowed me to carry to term, but the stress was less than enjoyable. Not to mention, the morning sickness and general “yucky” symptoms of pregnancy were dialed up to 11 this pregnancy.

Stress and throwing up aside, we were shocked and excited when I made it to 39 weeks pregnant. Excited is a relative term though. I felt like a whale with a bear strapped to it. When people tell you that you’ll show twice as quickly and get twice as big the second time around, they’re lying. It’s actually four times. I was beyond ready to have this baby.

Monday January 26th we had a family dinner at my parent’s house. Morgan made some beef tips and potatoes and we all gorged ourselves. As we were leaving I started to notice that perhaps I was “leaking” water, but after *cough cough* a mistaken case of broken water and an unnecessary trip to the hospital two weeks before I was a touch cautious with my assumptions. We arrived home around 8:45pm and Morgan was exhausted. He laid down and I briefly struggled with Max who, putting it lightly, isn’t the biggest fan of bedtime. Around 10:00pm I think I felt my first stray contraction, all in my back. I attempted to get some sleep, but couldn’t. So, duh, I took a shower. Seriously smart move ladies. Showers are the best.

By 12:30am contractions were consistently 10 minutes apart and I decided to wake Morgan and call the hospital and my parents. During this time I also watched 3 episodes of Scooby Doo: Mystery Incorporated and read my “urban fantasy” novel about a fairy detective in San Francisco. Priorities.

The pain was easily manageable at this point and I’m confident in saying I hadn’t entered active labor yet. My dad stayed at our house with Max and Morgan and I left for the hospital. We arrived around 2:15am and quickly determined that while my water was indeed broken I was only 1 centimeter dilated. They checked me in and ordered my antibiotic IV because I’m a Strep-B carrier (of course).

I had an unmedicated labor and delivery with Max and was dedicated to doing it again. I hadn’t particularly kept timing anything, but contractions were suddenly coming fast, heavy, and almost constantly. After about 40 minutes of those contractions I was a little panicked. I looked at Morgan, as we were both a little bewildered about what to do. We didn’t take a birthing class this time – been there, done that, right? Incorrect. We remembered nothing.

People joke about how great it is to have a fast labor, but holy moly, this was too fast. Between 2:15am and 3:15am I went from 1 centimeter to 7.5 centimeters. By 4:00am I was in transition and a room full of nurses were begging me not to push just yet.

I would love to weave some beautiful earth goddess story. That I turned to my inner strength. That I was the strong silent type (like I was during Max’s birth). No. It hurt. It hurt a lot. I screamed. I cried. I screamed and cried a lot. My mom heard me scream from the waiting room. No strong silent type here.

At what I assume was 4:22am the nurses told me that the midwife from my practice that was on call (Jearlyn Schumacher who also delivered Max) was walking in and that it would all be over in two minutes. Both Morgan and I asked if that meant I would start the pushing process in two minutes. Again, no. She would be here in two minutes. They flipped me on to my back and Morgan yelled “there she is!” and I asked why I didn’t hear crying. A nurse smiled and said, “you have to push.” I had been crowning for 10-15 minutes. I pushed once. At 4:24am on Tuesday January 27th they handed me our Eleanor. Morgan cut the cord and nurse ran to get my mother from the waiting room. She’d only been there 15 minutes.

Eleanor’s birth was a very different unmedicated birth experience than Max’s. Her birth was raw, brutal, and intense. It’s an experience I wouldn’t trade for anything, but I have a new (renewed?) respect for birth. It’s no joke. My pain levels were significantly higher this time. The second time around was faster but not easier. I was so much more aware of how messy birth is. I saw the floor guys. Holy mother of God, I saw the floor. 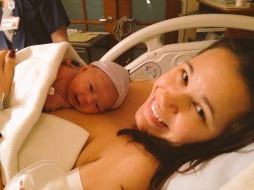 Because she was term and healthy at 7lbs 11oz and 19.5 inches, I haven’t had to be separated from her since her birth – no NICU! They handed her to me and we laid there together, skin to skin and nursing for almost two hours before moving together to the recovery wing.

Max came to visit us that morning and was delighted to meet his sister. Eleanor is a natural at breastfeeding and started gaining weight by day three.

She’s tough, fierce, beautiful, and one of ours. We are simply overwhelmed with our Eleanor.

View all posts by elsbethmagilton